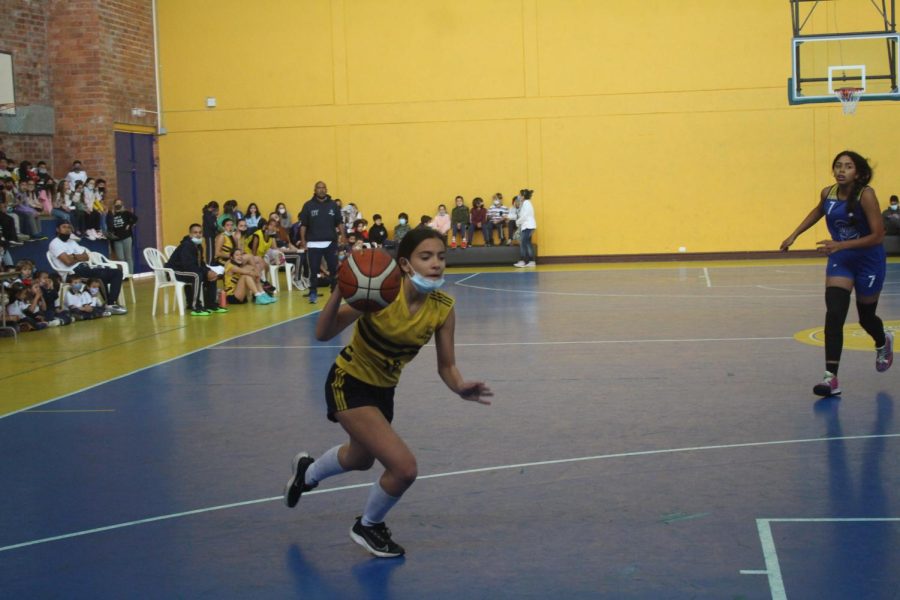 TCS Basketball player drives to the basket in a game a HS Copa Columbus on March 11.

La Paz beat La Javiera Londoño 25-21 in the finals at the HS Copa Columbus in the colisuem on April 8 2022.

After La Javiera Londoño was up 21-20 when the first half ended, Maria Camila Arbelaez, La Paz’s shooting guard, scored a layup while getting fouled. She was able to score the free throw, surpassing La Javiera by 2 points, but the win wasn’t secured completely for La Paz. La Paz managed to stay ahead of La Javiera but only for two points for the rest of the second half. That was until another player from La Paz, Isabella Muñoz, scored a three-pointer, giving them a 5 point lead that La Javiera could not surpass.

“We had an overall good game but a loss of techniques could have been improved and would’ve made us win,” Maria Rosero, La Javiera Captain, said.

The Columbus School Girls team defeated Pumas 25-22 to claim third place in the tournament.  The matchup was close but Columbus had no intention of losing another match. The first half was dominated by the Columbus, but at the end of the game they started to struggle to stay up on the scoreboard, but still managed to seal the victory.

“I knew this was going to be a tough match and my main goal was not to win but to make our team have an overall good performance and make the girls reflect that their commitment to our team was extremely important to these types of games,” David Lopez, women highschool basketball coach,  said.

The first match of Columbus was against La Javiera Londoño Basketball. Lopez yelled the instructions from the sideline. According to Lopez, the attendance for training has been decreasing significantly and it was reflected in the way they were playing. By the third half of the game, La Javiera Londoño had already taken advantage and was up by more than 5 points, this puts Columbus in a difficult position. After a long match, La Javiera defeated The Columbus team.

“I believe communication in these types of games is crucial and lately this has been failing for our team. We all did our best but we didn’t communicate as much as we had to make us start making little mistakes that unfortunately made us lose,” Ambar Alvarez, Cocaptain of the team, said.

The second game began and hopes were high. La Paz was Columbus’ second opponent and showed to be a promising team. It started putting pressure on the team, and by the second quarter of this game, the score is 12-7 with La Paz on top. Both teams were scoring, again and again, it was the tightest match Columbus had had so far. There were three minutes remaining in the game and La Ceja was winning 19-21, then after a build-up play, 9th grader Daniela Zapata scored a three-pointer to climb two points on top. The score was tight and the game went to overtime.

“At this point in the game, our team was exhausted but we were all doing our very best on the court, my heart was pounding when we went to overtime and it was exhilarating seeing how the whole Coliseum was cheering for us,” Zapata said.

After several attempts for La Ceja to score a winner or tie the game they finally generated a foul. Despite the great tension and the noise and chants of Columbus supporters, La Ceja converted one of the free throws, tying the game with 1:40 minutes remaining.

“I was very nervous while taking the two free throws, thank god I was able to score one of them to tie the game and go to overtime,” Manuela Calderon, La Paz’s top scorer, said

The score remained 22-22. All of the players were now exhausted. Then by the end of overtime La Paz convert one free throw, due to a foul by Juana Wolf. Then played defensive and denied all of Columbus’ scoring by opportunities for the rest of overtime. The game ended 23-22 and Columbus was now out of the finals.

“I really don’t like to bring clubs to the school competitions, people critique this a lot about me but what I want with these competitions that are not binationals is for my team of girls to be more competitive and gain experience, even though chances are that we might not win all the time I will always prefer bringing clubs,” Lopez said.