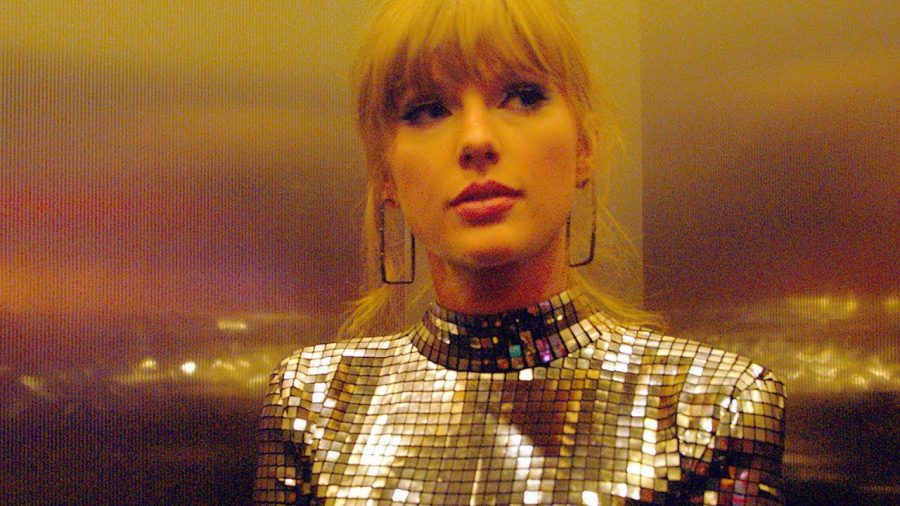 Taylor Swift for her documentary “Miss Americana,” which follows her trajectory in the music industry and the sexism and battles she’s faced.

When all you want is to gain approval, fulfillment comes from attention and warm validation from the public. Hard-working, talented, yet inherently young, Taylor Swift rose to fame and was damned with the title of America’s Sweetheart. Swift succumbed to the idea of being a female that men and the media wanted her to be, kept quiet on political affairs, and attempted to reach every ideal of beauty. However, none of her desperate attempts at perfection were enough, and none could’ve prepared her to become America’s prey. After countless scandals, people turned on her because they wanted her to be flawed. The public accepted the side of her that the media portrayed, a woman who played the victim and got a career out of it. Society’s underlying misogyny and sexism put her in the worst place of her life. Still, in the death of her reputation, she became the most influential artist and the powerful role model we know today.

A substantial part of her scandals has to do with the controversial rapper, Kanye West. In 2016, West released a taped phone call in which he asks Taylor for permission to say something diminishing about her in his song, “Famous”; Taylor seemingly agrees. However, she made a post on social media claiming that she never approved the song because she never heard it in the first place. The song also called her a pejorative slang word, and the music video contained a naked wax figure of the singer. Swift considered this as “character assassination,” but the public didn’t side nor agree with her. This triggered a wave of hatred towards Swift, so intense and belittling that she completely disappeared from the public eye for a year. Nonetheless, in 2020, the whole phone call was leaked. The phone call had been illegally taped and edited by West to make Swift look like the villain. It’s scary how men control women’s narratives in our immensely messed-up society. It happened to Taylor, one of the most famous people in the world, and it ultimately broke her down. How are women and young girls out there expected to feel safe and accepted when the level of misogyny in our world still continues to penetrate every aspect of society?

As Taylor’s success skyrocketed, the media decided to target her purely for her “scandalous” love life. The public was determined to make this young woman a slut. In her twenties, she dated just as much as any twenty-year-old can and should. Yet, headlines constantly shamed her for it, “She has been scrutinized for how many boyfriends she’s had when there are many other male celebrities who’ve had more partners, and much, much younger than them, and they haven’t been scrutinized the way that Taylor has been,” Salomé Beyer, Girl Up Campaign Co-chair, and Taylor Swift Fanatic, said. Other celebrities such as Leonardo DiCaprio have been equally active within their love and sexual lives, yet nobody has humiliated them for it. Taylor’s age and gender made her vulnerable. In 2013, DJ David Mueller inappropriately groped Swift while they were posing for a photograph. Swift and her mother, Andrea, did not file a report against the police because they didn’t want this event to get posted in tabloids for Swift to see thousands of times. By not reporting this, the pop singer responded the same way thousands of women do every year. In 2015, Mueller filed a defamation lawsuit against Swift for millions of dollars. She countersued for a dollar. The trial began shortly after, which Taylor claimed was absolutely dehumanizing. “For young fans of Swift’s, hearing a beloved artist speak candidly about the emotional damage of sexual assault and stand up to a courtroom of men trying to prove her wrong could be a formative moment for their developing ideas of gender, sex, and accountability,” Christina Cauterucci, Slate Magazine Contributor, said. By taking this stand, Taylor sent a message to thousands of young girls and inspired many women to stand up and speak out against their perpetrators. No public figure talks about groping being assault, but by doing so, Taylor’s joining and expanding the strong wave of feminism that is slowly taking over the world.

Swift broke her own political silence in 2019 by using her platform to endorse Democrats in the US Midterm elections. In a clip from the Miss Americana documentary, Swift sat down with her management team (all composed of men) and presented her desire to speak out on political affairs. Every member of her team refused to let her do this, but she claimed she needed to be on the right side of history. The day she spoke out on the topic, thousands of new voters were registered in Nashville, her home state. “I want to wear pink and tell you how I feel about politics,” Swift stated in her documentary. By being a famous woman, she was forced to stay quiet for many years to gain approval from the public. But as she matured, she realized that women could and should be multifaceted. Women can sing songs about heartbreak and love while standing up for themselves on unfair matters. The songwriter went on to write about her experiences in her recent albums Reputation and Lover. Songs like “The Man”, speaks about the double standards about gender in our society, and songs like “You Need to Calm Down” and “Miss Americana and the Heartbreak Prince” are intended to be political and a sign of alliance for minorities.

“Her music is more influential to me than any other artists’ is,” Beyer said. For young women in today’s climate, watching Taylor Swift grow from a scrutinized young woman to a feminist and strong artist is more noteworthy than anything else presented by the media. You may not like her music, but she has been one of the most influential artists in the music industry in the past decade.