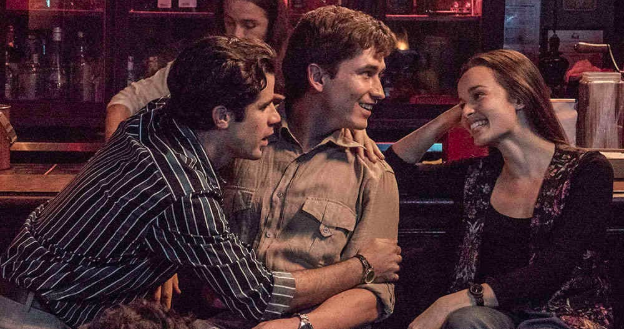 The Actors of Amigo de Nadie acting out the scene where Julian (Juan Pablo Urrego) is at his friend’s graduation party. There he is presenting his girlfriend to his best friend.

The book, Para Matar un Amigo, published in 2012, about violence in Colombia in the 80s and 90s and was released in November 2019. Reviews have been mixed with Semana giving the film 2.5 stars.

“I read the book because other people in the school already had, and knew about the real story behind the book.” Norberto Villa, AP Spanish Teacher, who already read the book and watched the movie, said. “Either way, it is a story with a lot of impact and knowing and feeling that an event from real life is told in that book.”

The plot talks about the ’80s and 90’s era of violence in Colombia, especially in Medellin, and it is based on the story of an ex-Columbus school student.

“So he (Restrepo) was looking for actors that were young like in their 17s until their 20s, that had an appearance of upper-class kids like they were Columbus school students,” Maria Adelaida Ospina, Simon Ospina’s Sister, said.

Restrepo read the book and immediately said it should be a movie. Gaviria, Simon Ospina, and Restrepo gathered and wrote a movie script based on the book.

“They (actors) had to look like  Columbus school students, with nice families but at the same time with a rebellious personality,” Maria Ospina said. “To have the main idea he was looking for good looking boys, nice guys with a lot of life ahead.”

With the script, Simon Ospina, Gaviria, and Restrepo won a contest that helped them obtain the majority of the budget for the process. Then they did castings in Medellin and Bogota.

“A character in the movie that impacts me all the time is the protagonist’s mother,” Villa said. “I don’t remember her name, but her performance in the movie, for me, was the best part of the movie.”

Restrepo wanted to focus the story on the five friends, especially the main character, Juan Pablo Urrego, which in the movie is Julian and in the book is Juan Camilo.

“The main character whose name is Juan Pablo Urrego is a very important factor here in Colombia,” Ospina said. “He has a lot of good characters in national television and for series of Netflix, there was no doubt that he was going to be the main character.”

While the book is narrated in a thriller themed way through the detective’s perspective, the movie is a drama and it focuses on the murderer’s point of view