“Eggstronaut”: More Than Just a Project 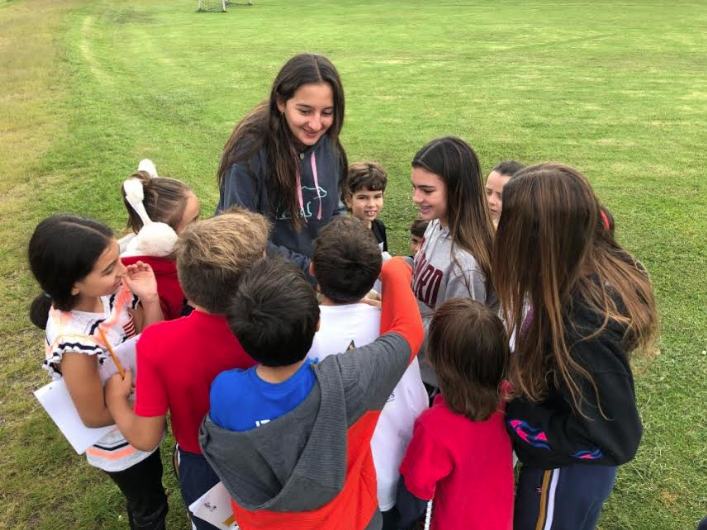 8th-grade physical science students have been building rockets by applying real-world physics concepts and are launching this week with the hope of successfully landing their “Eggstronauts”.

During the last 5 years, 8th grade has been hosting the Eggstronaut project in which students, with the help of Newton’s three laws of motion and real-life engineering, launch their plastic bottle rockets with the goal of bringing their egg safe and sound back to the ground, while among to have the fastest and highest rocket.

“We really like to do the egg drop project, it starts in 6th grade, and it’s a really good introduction to physics to the engineering design process and collaborative group work,” Veronica Armstrong, MS Science Department Head, said.

The Middle School Science department, as well as the students, are looking forward to this project; they not only strive to erect the most aerodynamic spacecraft and design the best rockets, but to have reached the highest altitude with their prototype with their eggstronaut still being alive.

“I am really enjoying the project, I enjoy learning all these new science strategies,” Kamalu Dlott, 8th grader, said.

Apart from delighting students, “Eggstronaut” is becoming a helpful tool for, introducing complex topics of future school subjects and basic engineering concepts. It is as well improving their cooperation, research and teamwork skills.

“I think it’s going to help me a lot in the future because we are practicing a lot of skills that help us analyze things I think I’ll use when I am older,” Martin Ochoa, 8th Grader, said.

Project organizers express pleasure when hosting this project because of how similar it is to the real world. With no room for mistakes, groups going from two to four students have to come up with a water-propelled rocket capable of safely landing an egg, keeping the NGSS standards (how they are assessed) requirements in mind.

“I think its a pretty real-world example because if the kids make 1 mistake their rocket fails and they need to learn about to how solve these problems in order to be successful,” Armstrong said.

Additionally, Eggstronaut young engineers are making an impact on even younger audiences. The Building and Design involved in the project motivated audiences such as the students in Miss Bush’s first-grade class to witness the final launch, where only each team’s best and final prototype would be launched.

“I decided to bring them because I love to make connections across the grade levels here. I think my babies can learn a lot from older kids.” Katheryn Bush, 1st-grade teacher, said. “They really look up to them a lot! Anything that a “big kid” thinks is cool, they are going to love.”

Nonetheless, the results of all the building, researching, modifying and designing Eggstronout left behind made a bigger impact than expected. The event concluded successfully and seemed to even motivate and please a large part of the event’s audience.

“I practiced self-control because I really wanted to touch them but I could not.” Matías de los Ríos, 1st grader, said.