Not So Social Media 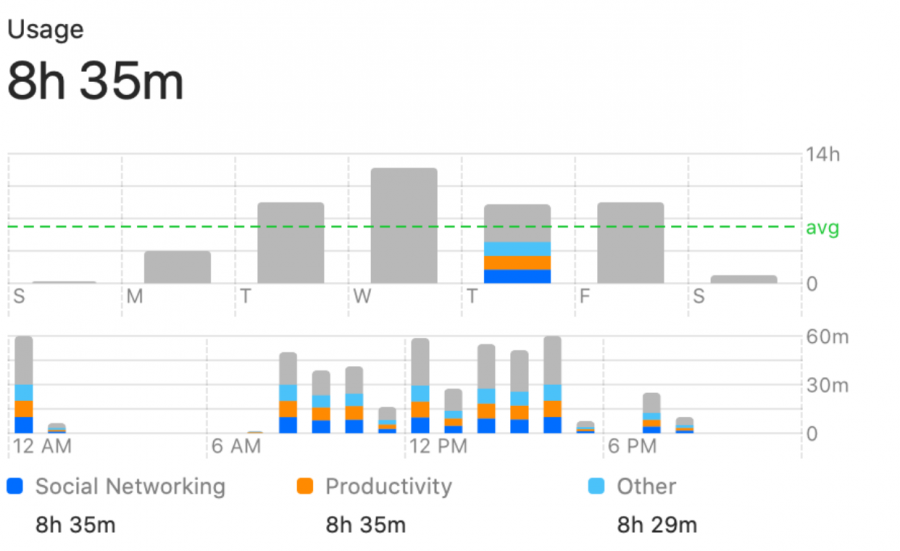 IOS feature called Screentime, where users can see how long they have used their devices for.

When we achieve something, what do we rush to do first? Post it on Facebook. When we are sad, who do we tell first? Our Twitter followers. Some might not find a problem with it, because we are sharing our lives with others. But will sharing a post with hundreds of followers have the same response that having a meaningful face-to-face conversation?

The use of social media is growing, and it is no coincidence that loneliness is at epidemic proportions. Nearly half of Americans always or sometimes feel alone, and it is not a problem that should be overlooked, especially since society’s dependence on screens has increased.

The internet has given us access to information and communication easier than ever before, and although it can make us feel more alone, there is no way to completely remove technology from our lives. Social media may not be harmful, the problem is how we use it. It is essential to figure out how to utilize it with some restraints.

People invest more time on their phones than they should. According to Social Media Today, the average person spends two hours a day on social media platforms, and other studies show that teens average nine hours of daily media use. This indicates that they spend more time with technology than socializing or doing other productive activities. Psychology Today found that people who used their phones more often were more likely to be feeling depressed or lonely. It makes sense because that time is not being used for real social interaction, “We lose the capacity for empathy unless we sit face to face. Technology and social media is a way of avoiding feeling emotions,” Jerome Feldman, Teacher at Montana State University, said. Another reason why this dependency is harmful is because of the mental health effect associated with social media, called FOMO: Fear of Missing Out. It is a behavior that originates from loneliness and from the need for social interaction. People are unable to leave their phones, wanting to be the first to find out about something, in hopes of finding their place in society. The world is too big just so that we stare at a screen for hours. There is a life you can create for yourself outside social media, and it does not have to fulfill its standards.

Social Media has a strong impact on self-esteem due to its sets of standards. 60% of people using social media reported that it has negatively impacted their self-esteem. There is an inverse relationship between loneliness and self-esteem, whereas the lower the self-esteem, the more lonely the individual will feel. We tend to post pictures where we look camera-ready and happy. This leads to the creation of unrealistic expectations when the audience starts believing that they need to be like what they see online. As Steve Furtick, an American author, says, “The reason we struggle with insecurity is that we compare our behind-the-scenes with everyone else’s highlight reel.” When people do not meet those standards, they feel alone and insecure. There is a digital illusion that does not match up the reality of these “perfect” individuals, and until social media does not become an outlet to show what we do instead of who we are, these standards will not leave. For people who are more emotionally secure, their self-esteem might not be harmed by seeing what social media expects of them. But for the majority, logging into that amount of social comparison is harmful, even if they do not realize it, and it can increase those feelings of loneliness and depression.

It is important to find a balance. Research shows that implementing a social media diet will have significant changes in loneliness. The University of Pennsylvania developed a study in which they limited student’s daily use of social media to 30 minutes. These individuals had notable reductions in anxiety and FOMO. This proves that everyone should limit their consumption to thirty minutes a day as suggested by professionals. IOS and Android offer a feature called Screentime, in which users can schedule time limits for apps. Everyone can begin by setting up daily goals. To increase the user’s well-being, it is recommended that instead of scrolling on their feeds, they engage with people on social media.  The first step is becoming aware of how much our devices consume our emotions, and ask ourselves if we are using social media as a replacement for something else.

There is no doubt that the internet has introduced tools to enhance our lives, and we are more connected than ever, but this can also backfire. The proper use of social media is necessary in order to not continue to fall into epidemic proportions of loneliness, “We don’t use technology, technology uses us,” Feldman said.