Pandemic Leaves a Legacy of Problems 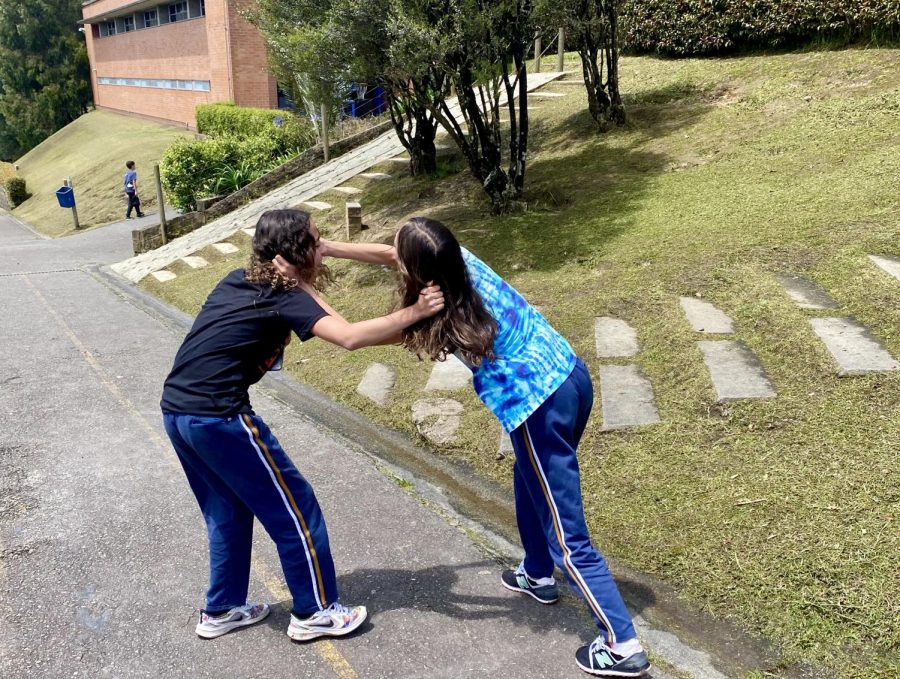 TCS has seen an increase in disruptive behaviors, vandalism, fights, and changes in social interactions since students returned to campus from the virtual classes caused by the COVID 19 pandemic.

The COVID-19 pandemic has affected society in many, lasting ways. After returning to school, problematic behaviors have seen a spike and there’s a growing concern that these struggles will outlast the pandemic. Since returning to face-to-face learning, there are higher rates of absences, mental health challenges, increasing rates of misbehavior, and concerns about lost instructional time. As a response, the school administration and junta directiva had to make important decisions this year regarding interventions and strategies to implement with hopes of ensuring a smoother transition to campus.

“At the beginning of the year, our message to the staff was; we need to be patient, we need to be flexible and we need to be empathetic. Our students for 2 years have been locked in their apartments and they’ve missed socializing with their friends so let’s really be flexible,” Paul Navarra, HS Vice-principal, said.

After almost 18 months of mandatory isolation, many challenges awaited students with their return to in-person classes. Students had to adapt last year to new ways of learning which included virtual classes and hybrid models. For many, it was difficult to remain engaged and motivated in online classes and this has been reflected dramatically this school year, both behaviorally and academically. Teachers and administrators have noted growing levels of cheating, lower levels of maturity, more defiance and challenging of authority, along with a greater presence of conflict.

“Maturity levels are much lower. Students who were in 9th grade are acting like 7th graders, and people in 11th grade are still acting like 9th graders. In my classroom, I saw an increase in cheating and I think the reason why is during the time of the pandemic students cheated a lot, and they didn’t come this year with the level of knowledge they needed to succeed, making them resort to dishonesty,” Gabriela Passentino, AP Calculus Teacher, said.

Student behavioral issues have also led to acts of vandalism. The boy’s bathroom by the 400-meter track was vandalized by multiple students who broke doors, toilets, and a window. Clocks went missing all over high school classrooms due to a TikTok trend. Toilets in the boy’s bathrooms were clogged intentionally with paper and many other types of destructive pranks have come along as well. Not to mention the fact that many students were very irresponsible with biosecurity measures.

“A big difference was the students came from the lockdown more socially immature, where even simple things like classroom routines have been a big issue,” James Bandura, Middle School Vice-principal, said.

Issues have also been reported in Upper Elementary as students are having a harder time staying focused on activities and following instructions. During parent-teacher conferences, parents were informed about the troublesome actions from children that were never a problem pre-pandemic.

“The hard part is coming back in a different setting. Although they had the same friends from the past years, factors like masks and all the new restrictions that our kids had made it difficult for them to focus,” Annia Duran, Upper Elementary School Principal, said.

When isolation was first announced at school, students were excited about the extended break. However, no one expected the effect this would have on mental health. According to the Colombian Institute of Neurosciences, after a survey of 651 households, 88% of children have some type of post-pandemic mental health or behavioral issue.

At TCS this has been reflected by students who have been dealing with excessive levels of anxiety, depression, and eating disorders, among others. Isolation also changed the way students socialized and made them more vulnerable to feelings of loneliness upon returning to school. Principals have reported a lack of empathy and the fear is that these changes have continued despite the return to school.

After coming back to campus, teachers had to modify their working routines and many have reported higher levels of stress and burnout. It’s important to recognize the pandemic had a toll on teachers and staff as well who have been dealing with the consequences of bad behaviors and unfamiliar routines.  Multiple teachers have implemented positive incentives to encourage new norms of behavior and help students regain motivation to learn. However, has not been an easy task.

“I had a learning structure that I’ve been using throughout the previous years. This year I noticed a decline in academic performance, due to the decrease in instructional time and the poor understanding from my students. This led me to change the dynamic of the whole course,” Passentino said.

The growing concern about disruptive behavior has led to a reassessment of consequences. HS Vice-Principal Navarra and other members of the administration are considering changes in consequences to reflect growing behavioral problems.

“I think we were a little too flexible and patient. You know the pendulum on a clock, we’re up at the top. Now we have to balance it out between yes we still want to be flexible but we also need to start tightening down expectations and consequences,” Navarra said.

Regardless, the pandemic was simply an outlet for underlying issues that were present even before the period of mandatory isolation. Students have long used the same outdated excuses to avoid school responsibilities with phrases such as: “I left it at home”, “I need to go to the nurse” or “the power went out at home”, becoming a recurrent way to get out of trouble. These behaviors escalated during virtual school. Some students now find different excuses to evade responsibilities such as cheating, sleeping in class, distracting other students, or leaving online meetings.

This is not just a TCS phenomenon, it is also a societal issue that’s happening all around the world. This year the school focused more on the logistics and protocols which is why next year teachers and staff plan on being very clear about the expectations for being a part of this community with hopes of restoring order.

“I saw more fights just in quarter 1 than the 10 previous years that I have been working on school, it’s urgent that we do something about it for the well-being of our community,” Bandura, said.