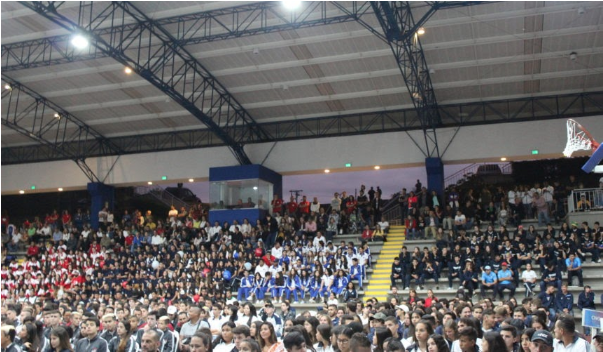 Athletes participate in the closing ceremony of this year's Binational Games in Armenia, Colombia.

TCS athletic teams have returned from the annual Binational Games without having achieved their goal of bringing home trophies and few teams performed to their expectations.

None of the six teams, Boys and Girls soccer, basketball and volleyball, won their competitions, with the best finish the 2nd place Boys basketball team who lost in the finals to CNG of Bogota. No other team finished higher than 6th place.

“I do feel disappointed with our performance because we have been training for a long time and preparing for the tournament, we have played a lot of games and put a lot of sacrifice to be able to succeed at this tournament, and sadly we saw that this wasn’t enough,” Jose Jaramillo, HS Volleyball Captain, said.

Lack of mental toughness and chemistry between players was a common problem. Several teams had many new players and the lack familiarity caused athletes to lose hope and confidence when they fell behind to another team.

“I think that the biggest problem that our team had during binationals was that we didn’t have enough chemistry, the big guys didn’t accept the young guys, and the 9th graders felt left out of the team,” Velez said.

Girls HS Volleyball Coach Anibal Betancur also believes that confidence was an important factor in his team’s performance. The team finished the tournament with 4 wins and 3 loses finishing in 7th place.

“I think losing had to do with the mental part, and this was what  throw us off. The players got anxious and we emotionally lost and that really affected the team’s performance,” Betancur said.

Another factor that affected the teams was the lack of training time.  The Boys Volleyball team lost a day their regular training time each week. This affected not only their chances to do well in the tournament, but the team’s unity, strategy.

“There were days where the middle school team took up all the space of our court and didn’t let us practice. And half of our team left because they didn’t want to do tactical activities instead of actually playing. That cost us a lot of work we could have done,” Nicolas Mejia, HS Volleyball Player, said.

Coaches and captains are now implementing improvements that focus on the mental game and team chemistry. Changes are adding more convivencias and team meetings to increase the level of confidence between the players.

“Some improvements we are gonna make is to arrange more convivencias, it could be at someones house or outside of school, but with the whole team, so we can feel like a family and just like a team. This way every player will get closer to others and we get to know each other better. so this way we can improve the mental game,” Jaramillo said.