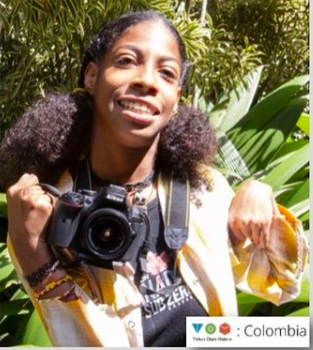 Imagine what you like to do in your free time. Now imagine having a condition that does not allow you to do the thing you love, or the things you always have wanted to do. The sacrifices that you and other people have to do so you can achieve your dreams and goals. These barriers and blockings are big, but you do your best to overpass them. You work hard, ask for help, and when you receive it and become successful after all, you are going to realize that you weren’t alone and that there are a lot of good people that are willing to help.

On a daily basis Angy Ximena, 23, likes to spend time on social media, draw, make Tick Toks, and watch anime. Her favorite is, “The Sailor Moon.” But what really motivates Angy more than anything is her passion for photography. She likes to spend most of her time taking pictures of herself and other things. After 23 years of living with Brain Paralysis, Angy was about to experience one of the best moments of her life.

According to the National Institute of Neurological Disorders and Strokes, “All people with cerebral palsy have problems with movement and posture, and some also have some level of intellectual disability, seizures, and abnormal physical sensations or perceptions, as well as other medical disorders. People with CP also may have impaired vision or hearing, language, and speech problems.” Angy has lived with a bad posture and problems with her speech since she was born. This has created many difficulties in the way she develops activities in her daily routine.

Tikkun Olam Makers or TOM is a global movement that connects communities with makers, designers, engineers, and people with incapacities. Their vision is, “A world in which technology and innovation allow every person access affordable for his or her needs.” Need knowers, people with disabilities, are matched up with a group of volunteers called makers, whose goal is to design a product that will improve the quality of life of the Need Knowers. Angy was one of the fortunate need knowers from TOM 2019, held at TCS. Ximena’s mother July Ramirez got in contact with a relative of one of TOM’s makers.

“Adriana’s son was one of the headline makers. He is part of the TOM project and they make devices for people with disabilities. She was a woman I met in the streets and was the mother of a maker,” July Ramirez, Angy’s mother, said.

Once a “Need Knower” enters TOM the main focus of the team is to develop a prototype that allows the person to develop an activity with more ease. Angy wanted a device that allowed her to improve her photography. Because of her disability, Angy needed to ask her mom, or another person nearby for help, she couldn’t use her phone. The Makers team designed a device for Angy that allowed her to access her cellphone’s camera through an app.

According to Hector Henao, one of the TOM Makers supporting Angy, the first thing they did was to start working on the central ideas and working on a strategy that was best suited for Angy’s condition. They came up with the idea of developing a tripod that could be easily used by Angy, she could access her cellphone’s camera through an application, then she could settle the position of the camera and adjust it as she wanted it. They made sure that the tripod didn’t make any exaggerated movements for the camera, and that was easily portable.

Angy’s mother had a first-row seat in the process of the development of the device that was being built for her daughter. “They had all the disposition and the equipment to create Angy a device, the tripod, they were all very involved when making the device, also through TOM the group got Angy a semi-professional camera,” Ramirez said.

The Makers opened a Vaqui account where people could donate to get Angy a camera. Through the Makers team, they all got Angy a semi-professional camera as a gift.

What do you think was the motivation for the Makers team to develop Angy her prototype? “The joy of knowing that this prototype, being replicable for free in the world, could serve as a guide for many people who have dreams and that through these “artifacts” they can be facilitated to achieve the same proposed objectives,” Henao said.

Henao also stressed the wonderful relationship the team developed with Angy at the TOM event.

“Angy is a tireless woman, she has a unique energy, her smile, her way of being always motivated us to want to give everything for her, she is a very beautiful woman in every sense of the word, she always taught us the value of struggle and that that of the “limitation” is in who wants to apply it no more,” Henao said.

With the tripod the Makers developed for Angy, she now could take better photos, film better videos, and was able to control her cell phone, something that she never had the opportunity to do before coming to TOM.

But not everything went according to plan. When the prototype was given to Angy it worked fine at the beginning, but then the heavyweight of the camera was too much for the tripod to hold. The Makers team acted quick to this situation and in a matter of time, they got Angy a new tripod, a conventional one, the problem was that this tripod didn’t have the system that the Makers team had implemented to the other tripod, so now July needed to help Angy use it.

Nevertheless, after TOM, many doors were opened for Angy, she was now able to practice her photography with more commodity, she could now hold her phone with her tripod to do TIK TOKS, and more people came by to help and entertain Angy.

“We have felt excellent after our experience here because thanks to TOM Anngy met a professor that teaches her photography and we attended several of his classes,” Ramirez said.

Angy’s mom July was very grateful to TOM and especially the Makers, the way she described how the Makers helped her daughter said it all, after asking her what she wanted to say to the TOM volunteers she said.

“The volunteers should cheer up, they are doing a wonderful job here and I’m very grateful for what they’ve done for Annie. The makers that have already participated in TOM know the experience and the good they are doing, so they should keep up the good work,” Ramirez said.

In the last moments of the interview, Angy wanted to say something to her mother

“Also thank the school a lot, they have done a lot for me,”  Angy said.