Grieving the Loss of Football 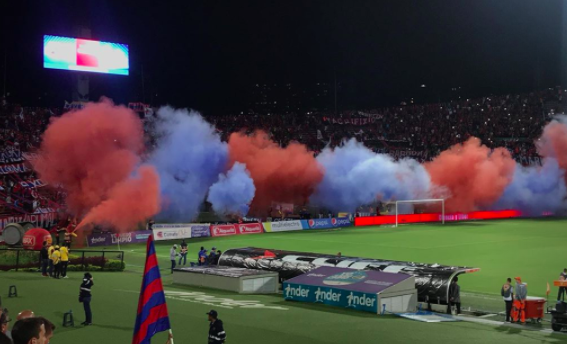 Deportivo Independiente Medellín fans (Rexixtencia Norte) release fire extinguishers as the team enter the field. A tradition to demonstrate support to the players.

Football stopped and my heart stopped beating. Since March 9, 2020 nothing is the same. More than 90% of soccer leagues in the world were postponed due to Covid-19.

When I got home after school, and after fulfilling all of my duties, I used to slouch on my bed and turn on the TV to watch some football. This was my favorite part of the day. I’m not the only one that did this. All of my friends and most people did it too. It is the most popular sport in the whole world. However, thanks to COVID-19 football was taken away from everyone; it is something that hit really hard on me. For some people, football is a business; for others, it is their passion; but for me, it is my way of living. I breathe soccer. I live around soccer. Apart from watching this sport and reading articles and news about it daily, I used to go to the stadium every week to watch the team I love (Deportivo Independiente Medellín).

Teams all around the world win money and make a great part of their profit due to fans going to the stadium to watch their team. Well, today, they have no profit at all because games are not played and fans can not leave their houses, teams such as Atletico Nacional de Medellín have announced that they are not having any profit at all, that their money is actually non-existent right now.

Juan Andrés Echavarria, The Columbus School 2017 graduate, has been studying in Argentina to be a football manager. “When I heard that football was stopping due to the pandemic I just could not believe it, I thought they would find the way to keep playing it but with the doors closed to the public,” he said. As I said before, for many people, football is a business and it is actually their profession. Apart from being affected emotionally, they are also being affected economically. Football moves a lot of money around the world. “If sports and especially football goes bankrupt, me and many other people will probably lose our jobs and all the time we have spent on the sport, we can not let this happen, football needs to be played,” Echavarría said.

Not just the soccer players, managers, and members of the teams are being affected for not getting paid, but a lot of people that worked in stadiums also lost their jobs. When I used to go weekly to the matches, there would be a lot of sellers, outside and inside the stadium, selling shirts, tickets, and food. Now, I wonder how are they doing to sustain themselves and their families, I’m sure these are very difficult times for them.

Also, most of the fans like me and Echavarría lost money with the absence of football. “I feel very affected by the quarantine. First, because I had already bought tickets for every game in 2020 which works as a subscription where you receive a card with your name and your picture, and you have access to every game, so I think I lost the money,” Echavarria said. The subscription I bought was around 300,000 pesos and my sister and my brother also subscribed, so my father lost a lot of money.

Last year, Atlético Nacional had 19,400 subscriptions and Medellín 17,200 in the second semester. It wasn’t just my father, but just in the city of Medellín, around 36,600 people lost their money. As teams all around the world are not getting profit at all, I am sure they will not reimburse our money back.

Football is not just a big business, but for a lot of people, it’s a passion. Not having sports, especially football, is affecting people psychologically and emotionally. In my case, it has been very hard because watching and playing soccer was part of my routine. For this reason, some times in quarantine I feel lost and unoccupied. Sometimes I play football with my older brother and younger sister, but it is definitely not the same. I miss the feeling I had when I scored a goal or losing my breath after running as fast as I could after the ball.

Like most of my friends are also fans of this sport, this was an excuse to spend time together. We used to go to play in La Jaula del Ángel weekly, and we reunited in a house when there was an important match. Now, we didn’t just lose the opportunity of watching and playing what we loved the most, but we lost the opportunity of doing it together.

Mostly, I miss my favorite team. I miss singing in the stadium to cheer, or celebrating with everyone around when there was a goal. Everyone that knows me well, knows this team is my life, and now, I don’t have it anymore.

Governments need to find a way to bring sports entertainment to our houses during this quarantine. If we have more entertainment at home people will stop going out and the number of infected people will actually reduce.

“My passion is football, I don’t know who I would be if it was not for football, it is the tool I use to de-stress, going to the stadium to watch the team I love makes me feel accomplished. When I go to the stadium and my team wins, my week is awesome, but if we lose it is awful. Football really affects me psychologically,“ Echavarría said.